My family and I are a bunch of gamers…board gamers. Ever since we were kids, we have been a very competitive foursome (my dad, my mom + my sister). On New Year’s Eve, we had an epic all-night game night where we played like 7-8 games in teams of two competing for the ultimate goal of having winner’s bragging rights for the rest of the year. So now it has become a tradition that we gift each other a game on Christmas to play during the year, so yea you can say I’m sort of a game expert. Here are a few of my faves – all with Amazon links – that you can buy to keep you entertained during the shelter in place orders! 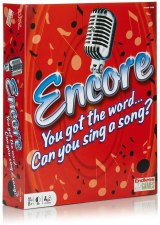 This game has been a family favorite since I was weeeeee youngin. We used to play this every chance we got when my parents would have people over. Yes, we were those annoying kids who wanted to play with the grown-ups. I apologize to all my parent’s friends who just wanted to drink in peace. Encore is a singing game. You split into teams and as you progress on the game board you hit certain colors on the board which indicates the difficulty of the word you will get. Once you pick your word card then you have to sing a song with that word in it. It sounds easy, but there is, of course, a timer and you have to SING it – you can’t just talk the lyrics so it gets really funny. Click here to shop. 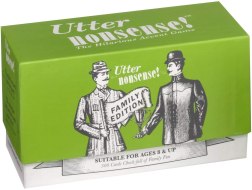 This acts similarly to a game like Apples to Apples. There is a judge and they pick a card that has a funny accent or voice card on it. Each player has to pick a saying from their stack of cards that they think the judge will think goes best with that funny voice or accent. Some of the voice cards are easier like a skater boy or a baby voice, but some are really hard like Jamaican (for me SO HARD!). There is a dirty version and a family edition.

This is def a family favorite after I bought the dirty version without realizing it. Life is never the same once you hear your dad say the words, “pussy bitch” in a sentence. There is a family version though! How it works: a set of random code words are placed on the table. Each team tries to guess the words on their assigned card before the other team does with the help of their spymaster who is coming up with code words to get you to guess the code words on their assigned card. It sounds complicated, but it’s really not once you get the hang of it! Click here for the dirty version and here for the family-friendly version. 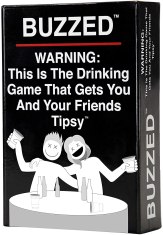 Another one of our family favorites! Pick a card, read the topic and then start the timer. You have 5 seconds to name 3 things that fit the topic. It’s a LOT harder than it sounds and very funny. All sorts of topics, but it’s definitely family-friendly and good for anyone over the age of 10. Shop here.